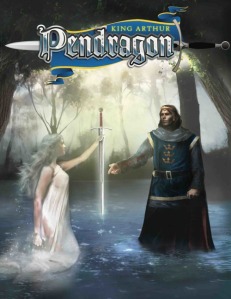 Every month, I or a guest GM, run a “one-off” for any one who wants to come.

It’s always a pre-determined game, set several months in advance, and we use it to teach, learn or try games, we’d not play normally, either due to interest, trepidation or others. It’s sort of a time we cut loose, just play an RPG, and enjoy company with out the structure or stricture of a full campaign (which we love, but a break is nice).

This month, we played King Arthur Pendragon, the 5.1 edition from Nocturnal Media. Only one of our players had played before, so it was a new experience for the rest of the guests.

I’ll recap: the reason I chose Pendragon was two-fold. First off, Pendragon is my all-time favorite roleplaying game. Bar none. I consider the mechanics, setting, roleplaying, and theme perfectly melded into the perfect game. As an RPG designer, it had more influence on me than any other game. I can’t talk about it enough, or rave about it enough to anyone who will listen (and often those who won’t). 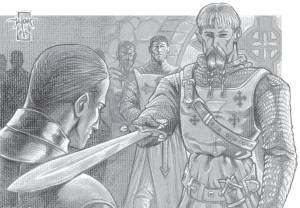 Secondly, due to my constant raving, talking, and musing on Pendragon, several of my players from my various groups who had never tried it, wanted to try it.

So we sat down, and I walked them through the base character creation in the core book. I was using the new Great Pendragon Campaign expansion of 480 – 484 that recently came out with The Book of Uther (review here), and set it in that time frame. 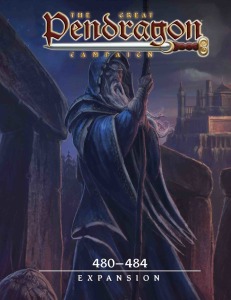 Character creation was a blast. The explanation of Traits (internal personality and emotional drivers) and Passions (external attachments and drivers) instantly fired the new players, and made visualizing their knightly character much easier for them. The skills, the family history, and the land ownership instantly invested them in the setting and the game, and made everyone much more involved that I usually see in a one-off.

That took about an hour to get everyone through, we determined their land, and got them started on their quest.

It was a brief adventure, involving brigands who were holding a small ford used for trading, newly knighted characters with something to prove, and a scheming manor lord out for more power and authority.

We did the Winter Phase (despite the one-off nature), because I wanted the players to experience the phase I consider the most fun in the game, and the aspect I enjoy the most, namely manor management. all the players but one successfully had children, and the odd one out lost his wife and child during the winter phase, and there was mourning throughout the land.

There was excellent roleplay all around, some great rolls, some terrible rolls, inflamed passions (in characters, not players), revenge, and honor. The game felt instantly captivating to me, and after the game, we had a recap, and the reviews were unanimously positive regarding the mechanics, setting, and ideas behind Pendragon.

I think I might be able to reboot my Great Pendragon Campaign shortly if I can keep selling the game like this. Of course, the game makes it easy to sell, due to it’s excellent and awesome nature.